The Ngalia Regional project comprises nine 100% owned exploration licences and three exploration licenses in retention (total area over 2,000 km² ) are located in the Ngalia Basin, between 180 and 350 km northwest of Alice Springs in the Northern Territory. These tenements surround the Bigrlyi project JV tenements (72% EME) and other small JV tenements. EME’s Ngalia Regional tenements and the imbedded small JV tenements contain a number of uranium deposits such as Walbiri, Sundberg, Hill One, Camel Flat, A15E, BigWest, Cappers, Karins and uranium exploration targets at the Dingo’s Rest, Penrynth and Malawiri prospects (refer figure below).

Six of nine Ngalia Regional Exploration Licences have been granted. Three applications (EL’s 24450, 24462 and 27169) are located on Aboriginal freehold land. The consent of the Traditional Owners is required before the Aboriginal freehold tenements can be granted. Energy Metals has been negotiating with the Traditional Owners through the Central Land Council and is confident that the Company will eventually gain access to these areas.

Most uranium deposits and occurrences known within the Ngalia Regional Project area are of the tabular sandstone type, hosted in the Carboniferous Mt Eclipse Sandstone. One exception is the Cappers deposit which is a surficial calcrete style of uranium deposit and another is the Crystal Creek prospect on EL30004 which is hosted in ferruginous veins within basement granite.

– The Sundberg and Hill One deposits are located immediately west and east of Walbiri, respectively. Review of historical exploration data allowed estimation of maiden JORC resources of 260t U3O8 at 259ppm for Sundberg and 159t U3O8 at 321ppm for Hill One, both at 200ppm cut-off grade (refer October 2015 ASX release).

– Located 30km southeast of Bigrlyi immediately south of the Yuendumu thrust. Minor anomalism was discovered in the mid 1970’s by CPM and later explored by AGIP Australia Pty Ltd. Mineralisation is a hybrid of structural and redox controlled tabular lenses. Drilling by EME in 2008 intercepted high grade mineralisation >2m thick, this was followed up in 2010-2013 resulting in a maiden resource estimate (February 2014) of 292t U3O8 with an average grade of 0.14%.

– Located immediately east of the Bigrlyi A15 deposit (2,260t U3O8 @ 0.17%). The A15E deposit was discovered by EME in 2011 as a result of widely spaced reconnaissance drilling. A15E is a shallow (<100m deep), high grade deposit exhibiting “Bigrlyi-style” uranium mineralisation. Follow up drilling in 2012 delineated steeply dipping plunging tabular ore bodies. The resource was drilled out in 2013 resulting in a maiden resource estimate of 187t U3O8 @ 0.13%.

– Located <2km southwest of Bigrlyi’s A1 prospect. BigWest is a blind discovery made by EME in 2013. Buried under 2-5m of alluvium, mineralisation occurs as steeply dipping 1-3m thick tabular ore lenses. The BigWest deposit is an extrapolation along strike of the Unit B/C contact at Bigrlyi’s A2 deposit. Mineralisation is redox controlled and hosted in similar lithological units of a different alluvial fan to the A2 deposit. The northern redox boundary playing host to >80% of Bigrlyi’s uranium resource is yet to be sufficiently tested due to large amounts of ground water and clays resulting in difficult drilling conditions. The maiden BigWest resource estimate as of February 2014 is 142t U3O8 @ 0.04%.

– Uranium mineralisation is associated with calcareous alluvial deposits at <10m depth. Cappers has similarities to the Napperby deposit located 20 kms to the SE. Total resource at Cappers using a 100ppm cut-off is 3,200t U3O8 with an average grade of 145ppm. 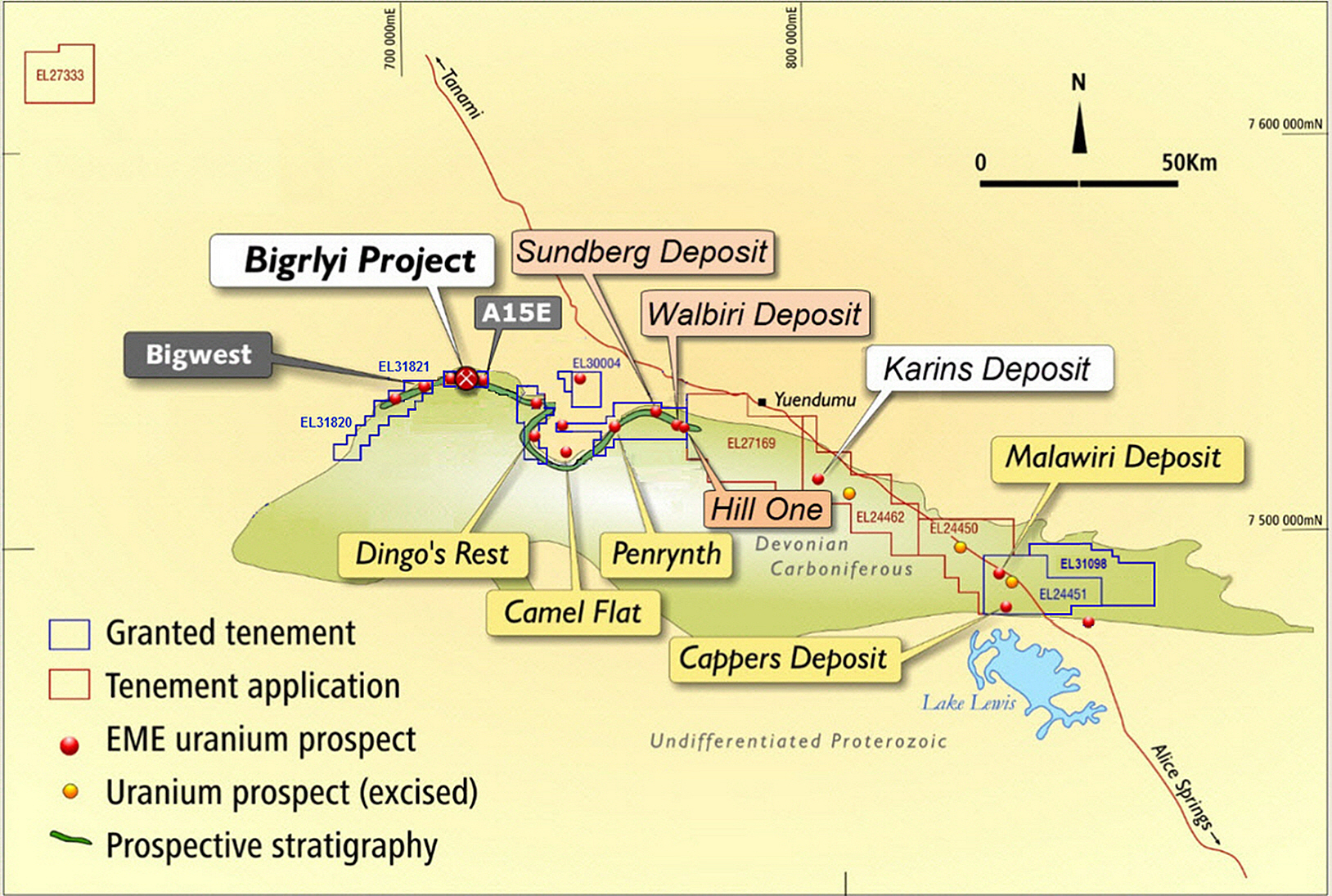